IDE CannyLab is a tool for application development using function block diagram language - CFD. It is used to write, debug, and upload programs to the internal memory of programmable logic controllers CANNY 7.

Integrated Development Environment CannyLab is distributed as a "portable" version. It does not require installation and can be run from removable media. Download the program archive from the website http://www.cannylogic.com/c7 and unzip it to a folder on your PC or an external drive. Run the file cannylab.exe from the program folder. It is not recommended to run multiple program instances.

The main window is divided into several areas:

Depending on the current operating mode of the editor, some of CannyLab menu items and panels may not be available or hidden. 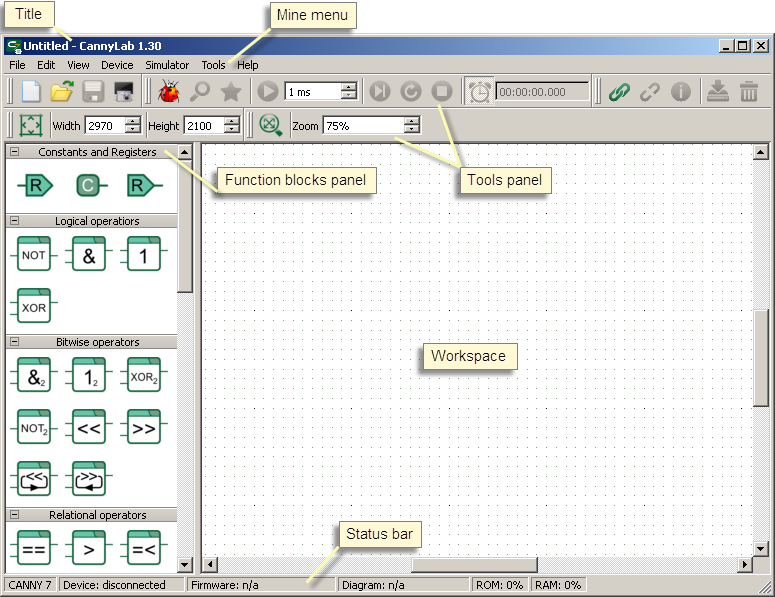 Create a new function diagram file by selecting "File" → "New" in the main menu, with the hotkey «Ctrl+N», or by clicking

The symbol "*" appears at the end of the file name in the header of the main window if any changes were made to the currently open file. If there were any changes made to the file, the user will be prompted to save it upon exiting the editor or creating a new function diagram.

Save the function diagram file under a new name by selecting "File" → "Save as..." in the main menu, in this case the name of the saved file and the path to it is set in the pop-up dialog box.

Save the file under the same name by selecting "File" → "Save" in the main menu, using the hotkey «Ctrl+S» or by clicking

If the diagram being saved would overwrite a file created in an earlier CannyLab version, the user is presented with a warning stating that the file won’t be able to be opened in older versions of CannyLab.

Opening of the function diagram file[edit]

Open an existing function diagram file, by selecting "File" → "Open..." in the main menu, using the hotkey «Ctrl+O» or by clicking

Alternatively, the diagram file can be opened by dragging it into the CannyLab open window.

The user is presented with a warning when they open a file created in an earlier version of CannyLab. An additional warning will appear if the current version of CannyLab can not correctly display all the information contained in the legacy file format.

Working in simulator mode, CannyLab performs actions to diagram data that are equivalent to the compute actions that would be carried out on them by the controller kernel, which allows the user to simulate the operation of the controller on the PC.

The user has the ability to simulate the execution of the function diagram for debugging and testing at any stage of its development. In simulator mode, it is possible to run the diagram on a per-cycle and per-step basis, set the conditions for suspension of execution, forcibly set the input and output values of the function blocks, control intermediate values.

Executable files for autonomously uploading software into the controller[edit]

The purpose of this file is quick and easy controller configuration in a fashion that’s comprehensible to the end user, as well as uploading software to the controller without relying on CannyLab IDE. From now on, we will refer to such files as firmware update utilities or SFX-files (SFX standing for self-flashing).