The main operating mode of CannyLab is the function diagram editor.

The user can use the clipboard for cutting, copying and pasting fragments of the diagram. The clipboard persists when opening a new file, which allows the user to paste between different files. Access the commands «Cut», «Copy» and «Paste» via the menu «Edit» or, like in other apps, use familiar keyboard shortcuts «Ctrl+X», «Ctrl+C» and «Ctrl+V» accordingly.

To quickly change workspace display scaling, use the mouse wheel while holding down «Ctrl».

To quickly move around the workspace area the user can use the «Drag-and-Drop» method by holding down the mouse wheel and moving the editor's workspace with the mouse. The mouse pointer will change from an arrow to a grasping hand.

Adding function blocks to the diagram[edit]

Selecting elements of the function diagram[edit]

Select any object on the diagram by clicking on it. When selected, the function blocks will change their background colour to yellow, while other elements will have their border highlighted in the “Selected Network Colour”, which is blue by default.

Select multiple objects on the diagram by drawing a frame around them - click the left mouse button on a free spot in the workspace and drag the mouse without releasing the left button, until all the necessary elements are selected. An element will be selected even if it’s only partially captured by the selection frame.

Clear your selection by clicking the left mouse button on an area of diagram workspace free from elements.

You can move function blocks around the diagram by dragging them, similarly to how you would drag them from the function block area. Select a block within the workspace(when you select the background colour of the block turns yellow), hold down the mouse button over it, then then drag and drop it wherever you want by moving the mouse and releasing the left mouse button. You can relocate multiple selected elements this way. As long as you are holding down the mouse button over one of the selected elements, all elements in the selection will be moved along with it.

Remove function blocks or diagram networks by selecting an object or group of objects to be deleted, then pressing the «Delete» key on the keyboard. Alternatively, you can right click on an element(which will select if it it isn’t already selected) and choose «Delete» in the context menu.

You can create a new connection line on the function diagram:

All valid input and output connection points are marked on the diagram by small green squares present next to each element. In addition, you can make an “unconnected” line by starting to create of a line and then double-clicking any spot within the workspace that’s free of diagram elements.

When you start moving the mouse cursor a connection line will begin to form. It will turn automatically, depending on your cursor position.

Add a line node (kink point) by clicking the left mouse button anywhere on the diagram that isn’t a connection point. Line nodes don’t move when you move elements they are connected to.

Finish creating the line by clicking the left mouse button on a valid connection point.

Break the line at an arbitrary point on the diagram by double clicking the left mouse button anywhere that isn’t a valid connection point. If you want to cancel the creation process altogether press the Esc key.

An unconnected line ends with a smart arrow that points one way or another depending on the position of the line on the plane and whether the line is a source or receiver of data. This also applies to named networks.

Modify the position and shape of the connecting line by dragging its straight sections.

It is possible to finish unconnected lines - continue their creation from the final node.

For line branching, click on the desired line node and continue creating the line from that point as usual.

Segments and networks of connecting lines[edit]

Click the left mouse button on a connection line belonging to any segment to highlight the entire segment.

You can remove a segment the same way you would remove any other element of the function diagram.

For convenience of working with large functional diagrams, the editor allows the user to create named networks. You can assign a name to any segment. Segments that aren’t connected visually, but have the same name will be logically connected “logically”: they work as if they were connected visually and represented a single segment. We will refer to such connection as a network. A network consists of one or more segments.

The use of named networks can reduce the total length and number of intersecting connection lines on the diagram as well as visually isolate groups of blocks related to one function. This increases the readability of the diagram.

Assign a network's name by double-clicking the left mouse button when pointing at a network to be named. Alternatively you can right click and select "Rename" from the context menu.

Naming the network is performed via a dialog box. You can either enter a new name for the network segment into the text field or select one that has been defined previously from the dropdown menu. Renaming an entire network works identically.

Function blocks have unique identification numbers, which are assigned to the block when it is added to the diagram. The new block is assigned the first available number in the range of numbers from one to the maximum number present on the block diagram plus one.

The identification number of the block is stored in the diagram file and remains unchanged on subsequent calls to the file.

To re-order block numbers at any time, use the option «Tools »→« Renumber blocks» in the main menu. When used, the blocks will be renumbered in order of their execution according to the current state of the diagram.

Numerical constants can be used as inputs for function blocks. Adding a new constant to the diagram can be accomplished in one of two ways:

Alternatively, a constant can be added directly to an empty input of any function block. Right click the specific input you want to add the constant to and select “Place Constant” from the context menu.

Following this a constant will be added directly to the input. By default, the value of the newly added constant is zero. Constants added in this fashion will be dragged along with the function block whenever you move it around.

Change the value of a constant by either double clicking it or right clicking it and selecting “Enter Value” from the context menu.

This will open a dialog window. The entered values can be in decimal, hexadecimal, binary, or symbolic form. The value will be displayed on the diagram in the selected format. 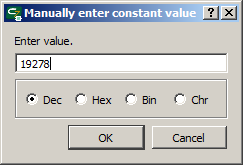 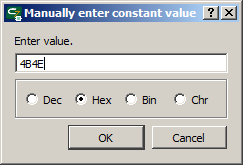 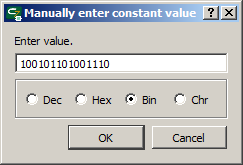 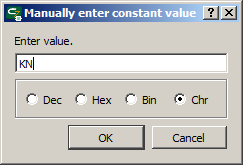 When the user changes the constant display format, the current value will be automatically converted into the selected numbering system.

Named constants are presented in tree view and grouped by purpose. 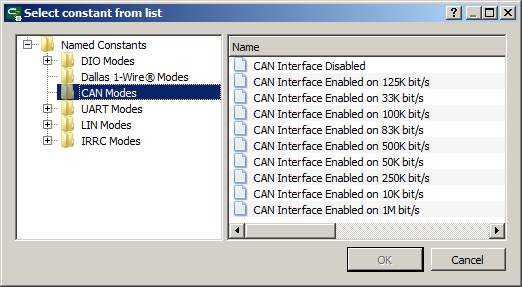 When choosing a named constant as the block input value, the constant’s abbreviated name will be displayed instead of its value on the diagram.

Add a new read or write register on the diagram in the following ways:

For example, adding a read register:

In addition, the register can be added directly to an empty input or output of any function block. Right click the input or output and select the appropriate option in the context menu.

After selecting the register as a data source or data receiver (or double-clicking the register that you placed in the workspace manually), a dialog box opens, listing all registers available for selection, grouped by functionality.

Unlike constants, registers can’t be entered manually, only selected from a list. 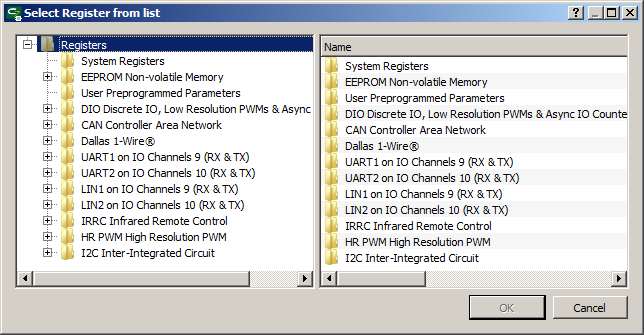 After you choose a register, its abbreviated name will be displayed on the diagram.