At the same time, up to four of the nine CANNY 7.2 duo input-output channels can be used to organize UART, RS-232 serial protocols data transmission/reception. It may be used to connect the controllers with each other or with external equipment supporting this communications protocols. The channels may be activated independently of each other and have individual data speed setting, protocol type and configuration, pull up line. Four UART interfaces capable of working in half-duplex mode, allows, if necessary, to organize on their basis two interfaces operating in full-duplex mode.

Size of receive and transmit buffers for each of the interfaces of the UART CANNY 7.2 duo driver is 64 bytes.

UART implementation in CANNY 7.2 duo controllers allows to organize serial data reception and transmission over a single wire in half-duplex mode. Thus CANNY 7.2 duo may have four independent connections using the UART protocol. Monitoring of the data link status should be done from the functional diagram. If the channel is free, the device may start data transmitting, otherwise the device should wait for the line release.

RS-232 implementation using any two UART data channels allows to exchange data with another RS-232 device in duplex mode, i.e. one channel for sending data, and the other for receiving data simultaneously. Thus, using UART channels in pairs, it is possible to simultaneously organize two independent RS-232 connections operating in duplex mode.

The following describes the acceptable and returnable values of the driver control operation registers.

UART driver configuration is determined by the constants that represent the combination of parameters that determine the speed, mode, additional date transmission parameters and line potential in the passive mode.

Named constants that represent UART configuration parameters combination, available to the user in the "UART Modes" CannyLab constants directory, which can be accessed via function block entry context menu having "constant" type.

Operating in UART mode, the controller can perform half-duplex data transmission/reception on a single wire.

An example of a functional diagram for UART communication. The controller, having received a message of 2 bytes in length via the UART1 interface, saves them in the corresponding named network for further processing, and on the next cycle of the diagram execution sends 2 prepared bytes of data back.

Operating on the RS-232 protocol controller can use each of its data transfer channels only in simplex (unidirectional) mode. When using both UART channels, which operates independently of each other, it is possible to organize a full-duplex mode of data transmission via two wires: one channel - only reception, the second - the only transmission.

An example of a functional diagram working with RS-232. Receiving data through UART2, provided that the value of bytes D1:D0 is "0xAAAA", the controller sends, via UART1, 2 bytes of data containing the value «0xBBBB».

UART/RS-232 driver includes functionality automatically create and verify the checksum using the Modbus RTU standard, which simplifies controller inclusion to the network operating under this protocol. Manage checksum formation for messages to be transmitted and its verification at reception is possible through the appropriate driver registers.

An example of a functional diagram of controller operating in Modbus MASTER-node mode over RS-232. Performing the diagram, the controller periodically sends to SLAVE-node with address 0x20 a request to receive from it the value of the Modbus-data register with address 0x0001. Getting an answer to its request, the MASTER accompanies with short blinking of green LED. 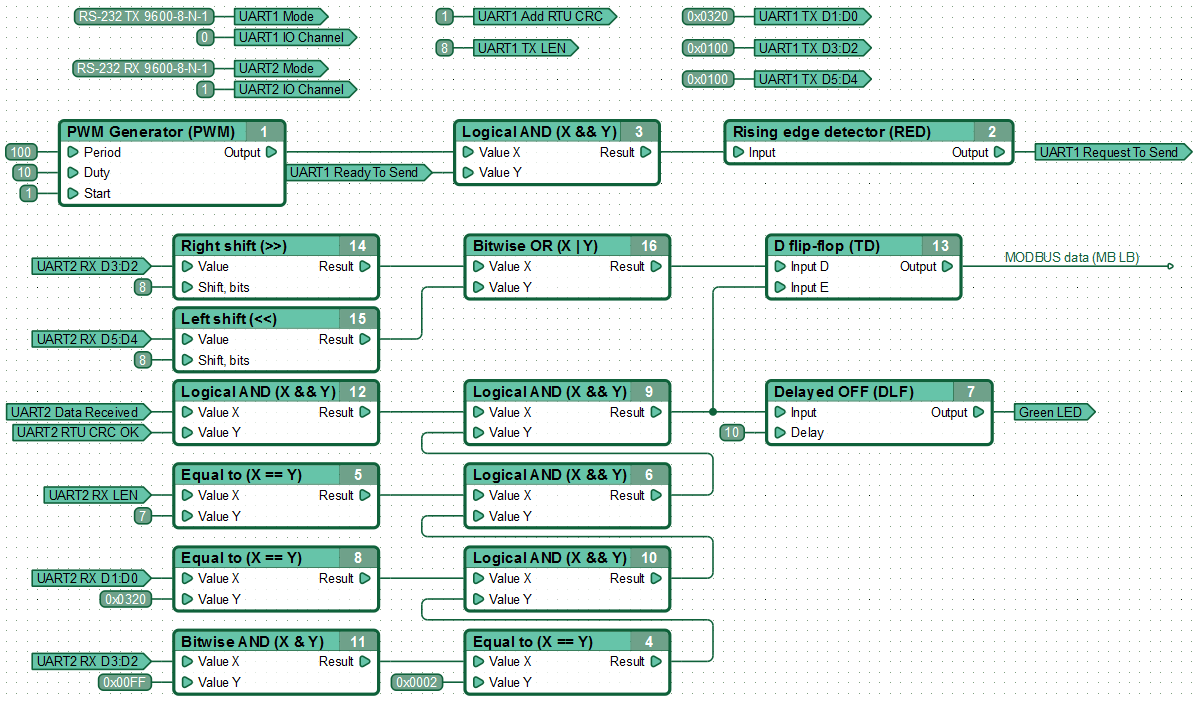 An example of a functional diagram of controller operating in Modbus SLAVE-node mode over RS-232. Receiving a request for data transmission from MASTER, the controller sends back the requested register state. Controller transmits 2 byte of data (+2 CRC bytes), as Modbus registers are 16 bits.

A response string, during data exchange between the devices will look like:

The value of the high byte of the requested register: 0x00 (D3 byte of UART1 transmit data register D3:D2).

The value of the least significant bit of the requested register: 0x10 (D4 byte of UART1 transmit data register D5:D4).