As well as CANNY 7 controllers CANNY 5.2 duo may be attributed to a class of smart relays or Nano PLC.

In contrast to the CANNY 7, controller CANNY 5.2 duo has two CAN interfaces.

Three channels of controller may be operating in the output mode and the input mode, one channel may operate in the analog-digital converter (ADC).

A feature CANNY 5.2 duo is support USB interface, which allows upload user programs to the controller without using a special programmer - is enough to have only the adapter cable USB-A - miniUSB, and support for UART interface to the USB interface (USB Virtual COM- port) allows you to share data with other devices such as PCs, during the execution of a custom function diagram.

The principal characteristics CANNY 5.2 duo include:

Requirements for writing software to the controller:

Controllers' memory accessible to user is enough to accommodate the program, consisting of several hundred functional blocks, which allows for fairly sophisticated algorithms. Two-coloured LEDs, controlled from the user application, are useful to indicate controller or debugging mode.

The main components of CANNY 5.2 duo are: a micro controller (MCU) with the auxiliary circuits, power supply system for all controllers' elements, IO channels level matching circuit, electric protection system, connectors and LED, based on a single print board 65 x 23 mm mounted inside a quick-open plastic casing. The controller has three external connectors and one internal. To connect the controller to the power supply and external devices, the kit includes a set of jumper harness. 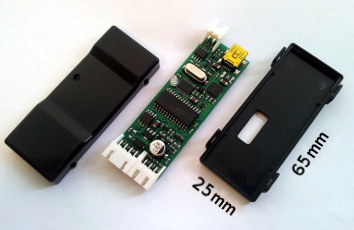 By default, on the controller board, between the CAN1-H and CAN1-L lines, a terminating resistance is set.

If necessary, this resistance can be disconnected by breaking the “term” jumper located on the back side of the board near the X2 connector. You can restore a broken jumper using special pads. 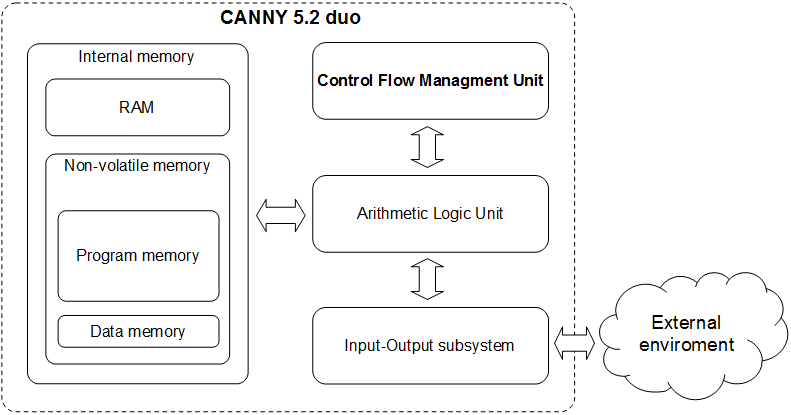 Arithmetic Logic Unit is the processing core of CANNY 5.2 duo. ALU provides system software and user functional execution diagram placed into the internal memory of the controller. Controller's internal memory is divided into the EEP program memory, EEP data memory, and ROM. The command's management subsystem is responsible for switching and setting mode of the controller. The IO system provides controllers' communication to the outside world, using both discrete IO channels and standard digital interfaces CAN / UART / USB. 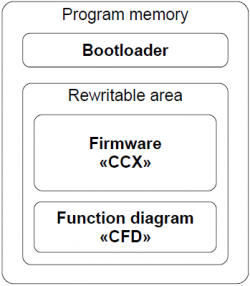 The bootloader provides the controller with the software download mode, organising data transmission between CANNY 5.2 duo and PC. It checks the data integrity transmitted from the PC and loading to the controllers' internal memory. The bootloader placed into the internal memory of the controller during production and can not be deleted or modified by the user. The manufacturer distributes CANNY 5.2 duo firmware in CCX file format. It includes an operating system and a set of drivers providing function diagram execution and its interaction with the controllers' resources. The contents of various CCX files can be reloaded into the controller by user but user is restricted to modify CCX file content.

Custom block diagram is created and modified in CannyLab IDE, then it can be loaded into the controller where it specifies the algorithm to work standalone or saved in to CFD file.

There are several operation modes to perform basic operations with controller.

In this mode, the controller is running bootloader to load firmware, and functional diagram under CannyLab management. Controller switch to this mode automatically when connected to PC. More information in chart General Information

To move the controller in this mode, you must connect it to a PC via USB-A-miniUSB-cable adapter, with the embedded controller is activated the green LED, and connect the device to a PC, the LED will stay on.

Exit from this mode happens automatically when the connection to the PC is disrupted. At the end of the software download mode, if EEPROM system software is loaded correctly, the controller will switch to running mode, otherwise it returns to SW download mode.

Running mode is the main controllers' mode. In this mode, the controller is running continuously under system software sequence, in an endless cycle, performing the functional diagram, working on the algorithm specified by the user.

Transition to this mode takes place automatically when the controller is connected to an external 12V power supply.

When operating in this mode, the functional diagram has access to all resources of the controller and drivers included in the controllers' system software.

This mode is an option of normal running mode in which, after each cycle of execution of a function diagram, the controller pauses to reduce its power consumption to a minimum. Thus, the controller operates in a pulsed mode, periodically "asleep" and "waking up". Enable, disable, and configure the parameters of this mode are controlled by the functional diagram. Using this mode is relevant when developing systems, focused on battery-power, such as the on-board car equipment.

The graphical block diagram developed in CannyLab environment, automatically processed by the translator just before loading to the controller. CannyLab checks on the consistency of the diagram, determines function blocks execution order and converts the diagram into the executable code - a sequence of machine instructions CANNY 7 controllers' ALU. 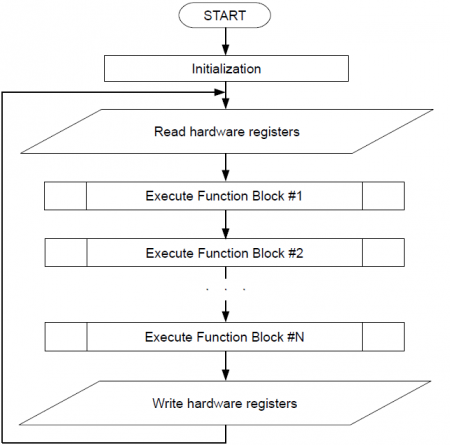 The user is able to specify the read-only register address as a source of input data from virtually any function block of a diagram. Thereby extract and use to implement their own algorithms, data received by the controller from the outside world. For example information about the electric potential on any controllers' terminal, or the data packet contents received from the CAN bus. Write-only register address can be used as the output target for any functional block on the diagram. Thus, the user controls the resources of the controller from functional diagrams which gives an opportunity to influence the objects of the outside world. For example: switch external relay by changing the electrical potential on one of the pins of the controller, turn LED on; set CAN operation mode; send a data packet.

The most resources used include assignment required operating parameters, such as the CAN communication speed and so on.

Specifying these parameters is made in the form of recording specific constants in one or a few specific registers, depending on a required set of resources configuration. For example, the transfer constant of value 1 in the register, located at 1027 sets CAN0 driver settings for bus operation to 125kBod speed.

In CannyLab IDE, for user convenience, all the of the controllers' available registers are named, as well as all special constants that are used in interaction with the controllers' resources. Therefore, the operation for the user CannyLab looks like setting a constant named "CAN 125" to register the name "CAN0 Mode Setup Register».

Similarly, the appearance of the value "1" in the registry located at 1184 ("DIO Input Value, IO Channel 8"), we can learn about the application of a negative electric potential to the pin 1 connector X3 of controller.

System resources are divided into an address group of read registers and an address group of write registers. Referring to the given registers from the functional diagram, you can get demanding information for practical application about the current status of the controller, and control its operation mode. The set of system registers located in the "System Registers" directory of CannyLab IDE registers list, which is available via "Input Register" and "Output Register" context menu.

CANNY 5.2 duo users have access to three discrete general purpose IO channels. Each channel is physically available through corresponding pins of X3 connectors. Writing and reading data of the respective drivers registers, the functional diagram can manage the electric potential in each of these contacts and getting information about the current potential of each of them. The channel physical characteristics allow connection to various external low-voltage control circuit, or using an external protection diode, small electromagnetic relays. As an external digital signal controller capable of managing the work may use mechanical, electromechanical, and electronic buttons and switches, pulse generators, sources 0-12V voltage, the transistor outputs of various equipment, etc.

Channels operation mode and parameters specified by function diagram. At any given time, the channel can only work in one of the possible modes, but it is possible to dynamically override the channel configuration from the functional diagram.

Controllers CANNY 5.2 duo have two independent CAN interfaces. Two special external contact Canny controller 5.2 duo, located on the 4-pin connector X1 (CAN0-H and CAN0-L of CAN0 interface) and the contacts on the 2-pin connector X3 (CAN1-H and CAN1-L of CAN1 interface), provided for connection to digital information CAN-buses.

A feature of the driver CAN controller CANNY 5.2 duo is that the number of filters CAN0 interface is equal to 8 (compared to 16 in CANNY 7). CAN1 interface have only 4 filters.

Interfaces CAN0 and CAN1 have individual settings and can operate at different speeds of data exchange that allows you to connect CANNY 5.2 duo controller simultaneously to two different CAN buses.

Using the CAN gateway driver you can to implement the high-speed asynchronous relaying of messages between the CAN hardware interfaces with optional filtering and altering particular CAN messages.

The CAN gateway driver allows you to realize individual processing of incoming CAN messages by configuring up to eight selection rules (selectors).

The user preprogrammed parameters can be set by the end user during loading a software to the controller with Firmware Update Utility. After loading the software and launch the controller in stand-alone mode, the user-defined data become available to the functional diagramin in relevant controller registers.

Proper use of user parameters greatly increases the flexibility and versatility of the controller-based solutions, alloving the end user without expirience working with CannyLab, make safe changes in the operation of the controller algorithm using a simple user interface.

To eliminate loss of critical information (state of the controller, external devices status, and so on..) in case of power reset , CANNY 5.2 duo controller equipped with non-volatile memory. The values saved in EEPROM will be available in special registers after the power is restored.

There are 64 16-bit non-volatile memory cells, which are accessed by corresponding read and write registers.

CANNY 5.2 duo supports Analog-to-Digital Converter (ADC) mode for one of three IO channels - IO Channel #10. This ADC converter have about 33k input impedance and can be used to measurement the input voltage from 0 to 15 V with 12-bit resolution and 1 millisecond sample rate.

To activate the ADC, you need to write any non-zero to register «ADC Enable Register, IO Channel 10».